Hi, My Name is Neily – Today is a Special Day 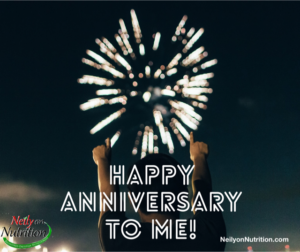 Today is a special day—an anniversary I acknowledge every year, but not publicly. This is a first, a vulnerable moment.

Thirty years ago was my last drink. Yes, I was a mere child (smile), barely old enough to drink alcohol. I will never forget the day, the event, what I was doing, who I was with—at least most of it.

I was living in a wonderful near North high rise condo in my hometown Chicago, had a terrific job with the NCR Corporation, and had everything going for me, sort of.

It was a Sunday—time I often spent with my dad.

We had tickets to the Cubs vs. Phillies game at Wrigley Field. It was hot, very hot—as many mid-summer afternoon Cubs games were. Night games were a thing of the not-too-distant-future. It was almost one year to the day that lights went on at Wrigley.

Our post-game destination was El Jardin’s, well-known for their strong margaritas, an urban legend. Cubs won 3-2, 10 innings. But I never saw the end of the game leaving early to snag a table at the restaurant.

I’ll leave out the details to not make this long post longer, however, there is not much I remember after beginning my second margarita. That was after drinking beer at the ballpark. What I’ve thought numerous times over the years is this—thank goodness camera phones and social media were years away.

That unflattering point of my life was never memorialized on YouTube. Thank you! Thank you!

I wanted to crawl under a rock

I woke August 3, 1987, knowing the drinking had to stop, at least temporarily (I naively thought). Having limited memories of the day before, my boyfriend gladly shared the details. The fog lifted and bits and pieces came back to me—I wanted to crawl under a rock. A month prior, divine intervention helped me recognize and then stop my rising dependence on cocaine, so I wasn’t surprised about the alcohol.

Fortunate to have an Employee Assistance Program with NCR, I made an appointment. The counselor asked three questions forever cemented in memory:

My positive response to all three led to the next 20 questions and confirmed the counselor’s suspicions.

“What if I said you could never drink again if your life depended on it?” I burst into tears. Not the response someone without a drinking problem would have. Short story, I got help.

Unfortunately, it wasn’t all roses and butterflies. Letting go of alcohol and drugs enabled my first drug of choice—food—to rear its ugly head. Food was my addiction until I was old enough to experiment with drugs and alcohol. My story is briefly described here where I made mention of quitting alcohol but didn’t give details.

Food and dieting was a life of restriction—going on and off diets. I guess it wasn’t surprising bulimia was in the picture at one point. Without a doubt, I would have fallen prey to cleanses, gluten-free eating, Paleo, keto, and probably been a distributor of every pill, potion, and program possible had they been prevalent at the time.

This will be the last!

Every diet was going to be the last. It never was. Each always ended the same. Restriction, deprivation, ultimately craving foods I restricted leading to an uncontrollable binge followed by guilt, self-loathing, depression, feelings of worthlessness, failure, etc.

Thankfully, it’s not a life I live anymore. What changed? Education (well, and a lot of therapy!). I was ready for a career change so went back to school to get my Masters in Exercise and Sports Nutrition becoming a Registered Dietitian Nutritionist and then a Wellcoach® Certified Health Coach.

During my journey, I realized being healthy, confident, and full of energy was not about restriction, dieting, good foods/bad foods but about empowerment, freedom, and guilt-free eating.

I tell my clients and students there are only two bad foods:

Those are bad foods. Don’t eat them.

Back to the alcohol

Quitting drinking seemed “easy” compared to food. Alcohol can be out of sight out of mind. Food is another story. You need to eat to live. You don’t need to drink (alcohol) to live.

You might have been around me, at a social event, at a friend’s, at a conference, a networking event. Does your drinking bother me? No. If it did I wouldn’t be there.

Please, enjoy your glass of wine. ?

Shoot, I’ve seen more wine and champagne flowing at some of my family gatherings and no one ever treated me different, nor did they need to.

What is an alcoholic? Who is?

Good question. I’m not an expert. Never have been and never will be. All I know is this:

To me, it’s not so much how often or how much, but, what happens when you do drink? For me, I don’t want to know. I used to know but I choose to keep my sobriety.

My life would not be what it is today without it. For that I am grateful.

Happy 30th anniversary to me.