The New Year’s tradition of black-eyed peas — Bring on the luck and prosperity!

I moved down to Texas quite a number of years ago and when I had my first New Year’s was served black-eyed peas. It turns out it’s a Southern tradition—supposedly black-eyed peas bring luck and prosperity.

Apparently, the tradition started with the Jewish holiday, Rosh Hashanah. But if you are in the South on New Year’s Day or even New Year’s Eve after the strike of midnight you might be served black-eyed peas.

There are many different ways to serve black-eyed peas but I’m going to share with you how I make them—my version of Texas ‘Caviar.’ What I really like about this tradition is that black-eyed peas are really wonderfully nutritious. So, it’s a great tradition, I think. Black-eyed peas are also known as cowpeas and they are technically not even peas—but actually a legume, a bean. They’re a great source of protein, great source of fiber, vitamins and minerals, and phytonutrients, phytochemicals which are disease-preventing nutrients. So, excellent source of nutrients.

Rinse beans to reduce salt by 40%


By the way, with beans, by rinsing them in cold water for about two minutes you can actually rinse off about 40 percent of the sodium. So, it is going to be quite significant because they can be quite salty. Everything else in this recipe has pretty much no sodium in it. The beans are the only salty thing so the sodium will be offset by everything else. But anyway, make sure you rinse your canned foods, especially beans.

I’ll add some quinoa, which is a whole grain. I just kind of added some things to this Texas Caviar what I had around the house. There are 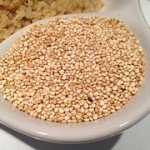 many different ways to make (this dish). Quinoa is a whole grain, and spelled ‘q-u-i-n-o-a’, which is nothing like it is pronounced but it is a wonderful grain, one of the higher protein grains, good source of fiber, also a great source of nutrients. So, I am going to add that. It looks a little like a couscous and is a very quick-cooking grain, as well. So, it’s nice if you’re in a hurry.

Add some color and flavor

Add some tomatoes, some bell pepper—I’ve got some red, some yellow and orange bell pepper here, onion, and a little bit of garlic. If I had some cilantro I would put some cilantro in here but I don’t. Mix that up. Now, we need something to blend this all together. There are several different things you can use to blend.

It’s nice if you have black beans in here (and/or corn, but I didn’t have any. Those add good color.) So, I really like the Newman’s Own Light Balsamic dressing but you could also use an Italian dressing. The key here is not to overdo because a little bit goes a long way.

Go easy on the dressing – a little goes a long way

Veggies are 90 percent water (at least) so there is going to be a lot of water that is going to be mixed in here—you can always add a little bit more, but you can’t take away. So, mix that all together. Put it in the refrigerator and let all those flavors meld together and then serve it with some tortilla chips. And there you have some Texas Caviar. (At least Neily’s interpretation) 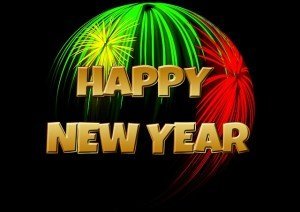 There are many ways to make the dish but the main ingredients are whole beans, tomatoes and a dressing.  My version happened to be what ingredients I had on hand—I’m all about improvisation!  This is what I came up with.

Mix together and refrigerate several hours before serving.  Can be served alone as a side dish or as an appetizer with whole grain corn tortilla chips.  Celery is another great crunchy option.

Other ingredients I might have added include:  cilantro, jalapeño pepper, black beans, corn, avocado.  The possibilities are endless.  Use your imagination!