One reason you hit a weight loss plateau!

Hit a weight loss plateau? I get that. It happens.

Years ago when I worked at Cooper Clinic I acquired a client when another staff dietitian left. The client had great success losing about 60 pounds in less than a year—just over one pound per week which was fabulous weight loss! But she had hit a plateau and her weight had not budged for several months.

Did you measure that?

She was doing all the right things: healthy eating, lots of veggies, lean protein etc, working with a trainer and doing cardio regularly at the Cooper Fitness Center. She was keeping food logs which are always very helpful. We reviewed them. Part of her breakfast consisted of an 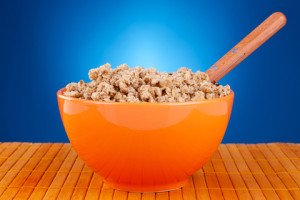 I mentioned the one cup she had recorded—did you measure that I asked? No she said, I used to but now I just eyeball the bowl and know how much to pour. Okay. Looking further I commented on the one tablespoon of almond butter she had with an apple as a snack.

Did you measure the tablespoon of almond butter I queried? No she responded saying at the beginning of her journey she did and now she has an idea how much it is.

We continued reviewing the records like that and you might get the idea of what was happening. Portion distortion. Do me a favor I asked and for the next two weeks, measure some of the foods you had regularly measured before and let’s see what happens. Sure enough, two weeks later she was thrilled with a three-pound weight loss and the comment that she couldn’t believe ‘how big my eyes had gotten!’

Her one cup of cereal had increased to one and a half. What was one level tablespoon of almond butter had morphed into a heaping tablespoon doubling calories from 100 to 200 all the while inhibiting her success.

Get back to basics

Everyone loses weight differently and at different rates. Having worked with hundreds of people over the years one of the most common mistakes I see is people being successful with weight loss*, hitting a plateau, not losing, getting frustrated and giving up.

I don’t think plateaus are inevitable if you’re paying attention to what you’re doing, how you’re doing it and what changes/modifications might need to be made as you move along in your journey.

Get back to basics. Think about it. What are you NOT doing now that you were always doing when you got started?  It may just be that ONE thing that helps you break through your plateau. Let me know your progress!

Need some help? Check out my health coaching services page and give me a call!

For more about record keeping read my blog and watch video with registered dietitian nutritionist Rosanne Rust Write before you bite – keeping a food journal.

*Remember ½ pound to 2 pounds per week is a good expection of FAT loss. Sure you can lose WEIGHT more quickly, but who wants to lose just water and precious muscle? (That’s another blog post.)