Gluten-free: The real reason it might help. PLUS! a gluten-free comparison

It’s amazing how many people are experts in nutrition. I was at a seminar last Saturday—totally unrelated to nutrition. (WordPress if you must know—I guess I’m a nerd at heart. Yep, spent a beautiful day geeking out indoors.)

Since I like to be a walking billboard wearing my Neily on Nutrition t-shirt I struck up a conversation with a woman visiting from California. As many people are prone to do, she shared a story of a friend.

The stories usually always start a certain way. I love them. Her friend read a book. Ah yes. And now they’re an authority on the diet du jour.

Gluten and wheat are killing us. Trust me—they’re not. But that is what people are led to believe—they’re drinking the Kool-Aid®. I’m not sure what the Kool-Aid® is spiked with however the leaders of the cults can be pretty darn convincing—to the ill-informed. I know. I used to be one of the followers—not of this fad but another that originally got me studying the science of nutrition in the early 1990s.

Granted if someone has celiac disease—the autoimmune disease where a gluten-free diet is the only cure—yes, gluten needs to be taken seriously and eliminated from the diet. It’s estimated about 1 percent of the population has celiac. Blood tests can confirm. (Resources can be found at the end of this post.)

Gluten is a protein found in wheat, barley, and rye. It damages the lining of the small intestine where most nutrients are absorbed. The damage causes nutrient deficiencies and a host of other problems—some going undetected for years.

This post however is not about those individuals. It’s about the other estimated 20 to 30 percent following a gluten or wheat free diet thinking that is what ails them.

The way many fad diets work

There are many ways adopting a new way of eating can be beneficial. I’ve written about this before—it’s the way many fad diets work.

I’ll use Maggie as an example. She has no time for a good breakfast so grabs a donut in the office break room and eats it washing it down with a soda. Overworked and on deadline she works through lunch drinking only a sugar-laden coffee beverage her assistant picks up for her.

Ignoring the hunger signals in the afternoon Maggie grabs a handful of Jolly Rancher® candies from her office manager’s desk. Later her brain is foggy so she drinks another coffee beverage for a pick-me-up.

Having nothing prepared for dinner, Maggie swings through her favorite fast food drive-thru munching on half the French fries as she heads home.

Exhausted from work and poor eating habits, she collapses and has no energy to even consider walking after dinner for some exercise. Instead

she settles in front of the TV and mindlessly eats her favorite sweet.

It’s the pattern she’s been keeping for over a year and finally hits bottom—like an alcoholic. She hears about a book that changed the life of an acquaintance. Maggie thinks, what have I got to lose?

Get your FREE 19-page guide - The Truth About Carbs.

These were some changes Maggie made:

Naturally she might attribute the transformation to lack of gluten or wheat. However I know better. Look at the changes:

You’ll get no argument from me that certain forms of gluten and wheat need to be limited—namely highly processed, manufactured products like pizza, pies, cakes, cookies, crackers, etc—but to put a blanket statement on all gluten-containing foods is foolish.

Yes, you can eat the Triscuits®!

Recently I had a home consult and was able to peek in the pantry, fridge, and cupboards. I was thrilled to be able to tell my client she could eat the gluten-containing cracker she loved but was avoiding, Triscuits®. Thinking she had to eliminate gluten because a friend said she needed to, she was eating gluten-free crackers instead. 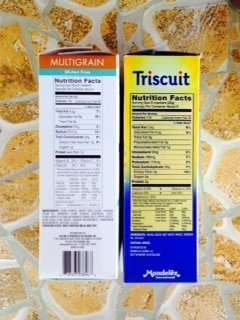 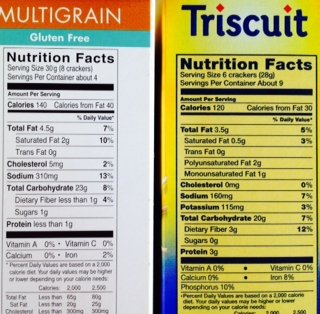 Nutrition Fact Panel
Gluten free vs. Triscuit
And the winner is?

Finally, compare the ingredient list—more is definitely not better. The gluten-free cracker has 15 ingredients versus 3 in the Triscuits®—whole wheat, oil, salt.

I find it interesting the gluten-free cracker very boldly states multigrain. Corn starch is the first ingredient. I’m not sure who is defining the grains. White rice flour is second on the list and buckwheat bran is eighth—one before salt. Since ingredients are always listed in descending order by weight, it’s questionable how much of the multi is buckwheat bran.

So you tell me—if you don’t have celiac disease and if you’re not gluten intolerant, why would you choose a product that is clearly not nearly as healthful as its gluten containing whole grain alternative?

No doubt many could benefit from cutting back on highly refined, white flour found in numerous packaged foods. But to condemn all whole grains despite the vast amount of solid science-based evidence on the benefits to health and weight maintenance is foolish and unnecessary.

Eat your whole grains. Eat the Triscuits®! They’re good for you!

P.S. If you struggle with knowing what to do, schedule a discovery call with me and we can chat.

Getting Started: Celiac Disease and the Gluten-Free Diet