Dinner without reservations: Average entrees are 1,128 calories—what to do?

Today’s blog was inspired and co-authored with my Bowling Green State University dietetic intern Denise Woods. It was a great collaboration!

Eating out shouldn’t be filled with guilt and regrets. It should be a pleasant experience. When choosing a restaurant, what do you look for—ambiance, convenience, price, taste of food, healthier options?

Just because you aren’t going to a fast food place, doesn’t mean you’re getting lower calorie, healthier, better options. According to a Toronto study, the researchers discovered that the average meal in 19 different restaurant chains contained 1,128 calories—about 56% of the recommended daily intake of 2,000 calories for adults. That’s just one meal!

Popular fast food items often have fewer than that. Excessive amounts of calories aren’t only seen in dinner entrees but are hiding in breakfast and lunch options as well.

Here are a few examples of popular menu items from restaurants. Their numbers are unbelievable! 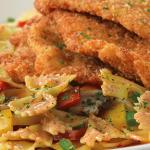 Lest you think, ‘Maybe stick to a salad?’ Think again. Unless you’re careful what you order, many can exceed 1,000 calories as I blog about here: Choosing salads because you think they’re healthier? .

Obviously none of the fast food alternatives are ‘good’ choices but it’s merely information to point out how challenging dining out can be if you’re trying to manage weight.

Being aware portion sizes have significantly increased over the years is important—some individual entrees can feed a family of 4.

To their credit, all the above restaurants have better options on the menu and they are good!

If a restaurant does not offer healthier options, here are a few tips: 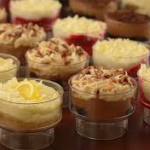 Eat slowly. It takes time for your brain to receive a message from your stomach that it has had enough. Eating out tends to be a social experience, so enjoy the company. Engage in conversation. (Neily’s tip: Be chatty! It will keep food out of your mouth!)